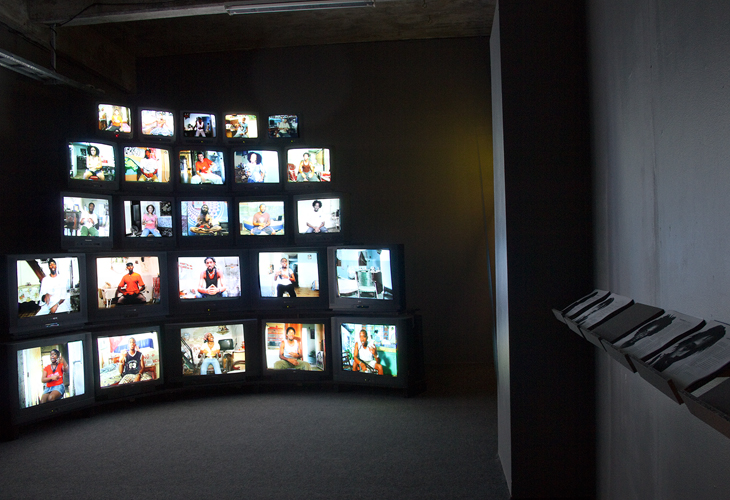 In order to define the aims of my work I will make reference to the concept which the art critic Claire Bishop calls »delegated performance: subcontracting authenticity« – contracting non-professionals or experts, whether paid or not, to take on the task of being present and performing actions in the name of the artist, at a particular time and place.

I work with individuals, whether professional or not, from other fields (chiefly urban poets, storytellers, mute poets, frustrated singers, etc.), whom I mostly involve in video and film contexts. These situations are not merely recorded, but also conceived and created with the guest artists performing their own creations. I deal directly with the reality of these artists, setting up the surroundings for their portraits within their own context and film their genuine performances.

My main aim is to draw attention to the critical stances and poetic demands expressed in the work of particular social-artistic groups and give them a more immediate, physical presence on the visual arts scene.

Through their performances, the artists that are invited to take part in my videos turn their opinions on contemporary social and political life into artistic products. What their acts usually have in common is that they are expressed orally and through gestures.  I am interested in the humanist ideas in the thought and discourse of these artists and also in the contemporary social impact of their significance as groups, movements or events within their respective societies.

My work consists of multimedia installations in which video plays a major role. In Ruido I invite 40 young Cuban rappers to speak their mind about Cuban society today through sung interventions filmed in their own domestic settings. This is a representation of a young generation whose voices, through their critical urban poetry, express the discontent, frustration, helplessness and lack of perspective in Cuba. My aim is to draw attention to the social impact of their significance as groups, and to their demands.  In the exhibition, the footage of the rappers is shown on dozens of monitors piled up to form a chorus, each showing the intervention of one rapper. The resulting cacophony becomes a metaphor for the conflict between a public context, in which discourse is reduce to mere noise, and a more private situation, where people can speak and be heard.

Biography Born 1973 in Cuba, lives and works in Germany. Yoel Díaz Vázquez received his BA from San Alejandro Academy of Fine Arts, Havanna, in 1997. Group shows include: In Other’s Words, NGBK and Künstlerhaus Kreuzberg/Bethanien (2012), Berlin; Other Possible Worlds – Proposals on this Side of Utopia, NGBK, Berlin (2011); 29th Sao Paulo Biennial (2010). The work Ruido, which is presented at the Göteborg International Biennial for Contemporary Art, was developed between 2006–2010.