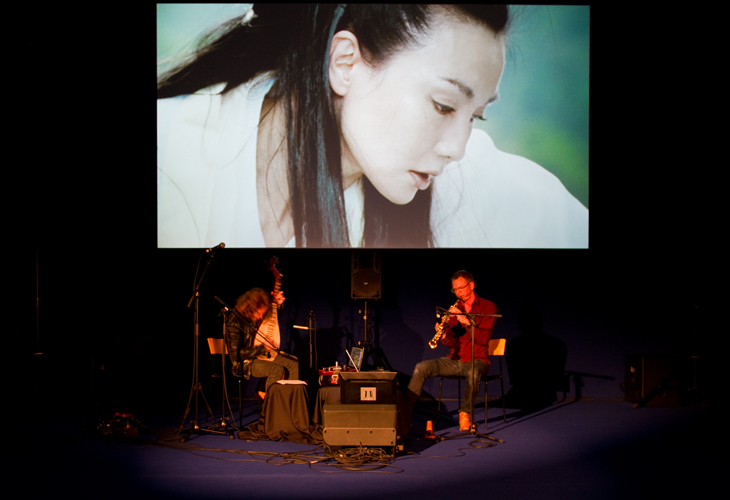 Having worked in the area of moving image for over 25 years, my work incorporates different artistic disciplines, drawing from and commenting on film, dance, photography, music, theatre, painting and sculpture, and uniting them to create a unique poetic visual language in audio-visual film installations.
BETTER LIFE is a single screen reinterpretation of TEN THOUSAND WAVES that was shot on location in China and poetically weaves together stories linking China’s ancient past and present. Through an architectural installation, the work explores the movement of people across countries and continents and meditates on unfinished journeys.
The original inspiration for TEN THOUSAND WAVES was the Morecambe Bay tragedy of 2004, in which 23 Chinese cockle-pickers died. Following ideas surrounding death, spiritual displacement, and the uniquely Chinese connection with “ghosts” or “lost souls”, the work links the Shanghai of the past and present, symbolising the Chinese transition towards modernity, aspiration and affluence - the so-called 'Better Life'. I employed the visual language of ghost stories, with recurrent figures and images appearing and disappearing.
The legendary goddess Mazu’s spectral figure (Maggie Cheung) traverses time and space, serving as a guide through the interlocking strands of the work. Mirroring the goddess of the fable, a ghostly protagonist (Zhao Tao) leads us through the world of Shanghai cinema via the Shanghai Film Studio, to a restaging of scenes from the classic Chinese film THE GODDESS (1934), and finally to the streets of Modern and Old Shanghai.
BETTER LIFE might be understood as the product of the oldest of cinematic pairings: The Director and the Editor. Translating the work from a multi-screen format to single screen, we faced a unique and rewarding set of challenges from the practical to the theoretical. The result is a dynamically re-edited single screen film that succeeds in using the classical tools of experimental narrative cinema to translate complex matrices of ideas in the manner of the most multimedia artworks.
BETTER LIFE, as a further rearticulation of the TEN THOUSAND WAVES project, moves deftly between the worlds of film, art and music and emphasises the importance of collaboration in my practice. This also represents the different platforms from which the work can be seen, in various transmutations, adding the "live" event as part of the work’s genesis.
Conceived and made over four years, I collaborated with some of China’s leading artistic voices, including: the legendary siren of Chinese cinema Maggie Cheung; rising star of Chinese film Zhao Tao; poet Wang Ping; master calligrapher Gong Fagen; artist Yang Fudong; acclaimed cinematographer Zhao Xiaoshi; and a 100-strong Chinese cast and crew. The film’s original musical score is by fellow East Londoner Jah Wobble and The Chinese Dub Orchestra and contemporary classical composer Maria de Alvear.

Biography Isaac Julien was born in 1960 in London, where he currently lives and works. After graduating from St Martin's School of Art in 1984, where he studied painting and fine art film, Isaac Julien founded Sankofa Film and Video Collective (1983–1992), and was a founding member of Normal Films in 1991. Julien was nominated for the Turner Prize in 2001 for his films The Long Road to Mazatlán (1999), made in collaboration with Javier de Frutos and Vagabondia (2000), choreographed by Javier de Frutos. Earlier works include Frantz Fanon: Black Skin, White Mask (1996), Young Soul Rebels (1991) which was awarded the Semaine de la critique prize at the Cannes Film Festival the same year, and the acclaimed poetic documentary Looking for Langston (1989).